The lakeshores of Lake Nakuru literally turn pink as millions of flamingos feed on its highly alkaline lake, set in a picturesque landscape of acacia woodlands and grasslands next to Nakuru town.

A very shallow and strongly alkaline lake, it is world known as feeding grounds of both lesser and greater flamingos and one of my favorite parks in East Africa. 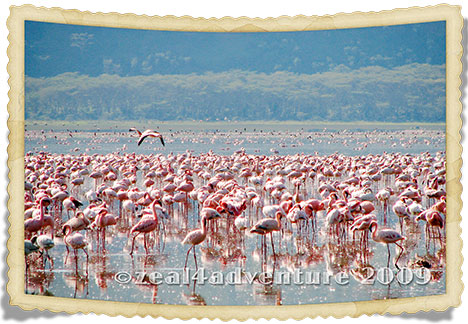 The main reason for establishing this national park was to protect its huge flocks of the lesser flamingos.  Despite being the world’s most numerous flamingos, this bird is classified as near threatened due to its lack of suitable breeding site. Depended on rainfalls, the lake keep decreasing since 1997.  The ecosystem is threatened by annual drought.

The second most visited park in Kenya, this small park has been dubbed “the greatest bird spectacle on earth” when thousands of flamingos landed into the lake years ago.  It has become a favorite destination for not only ornithologists but also bird and wildlife enthusiasts.  And the flamingos are definitely the reason to be in Nakuru!

Lake Nakuru National Park is situated approximately 2-hour drive away from Nairobi.  A gentle, billowing terrain with open bush and woodlands dominates it.  It is also one of the saline lake systems lying in the Great Rift Valley.

Famous for its abundant birdlife… 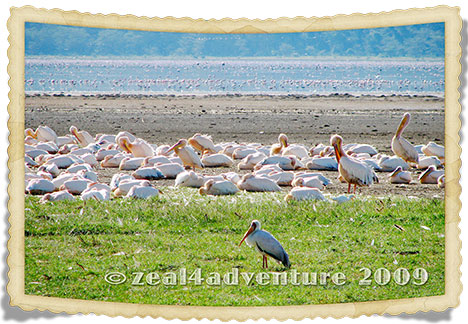 cape buffalo and the flamingos as its backdrop

not a Rothschild’s giraffe

the bushlands offers eland, steenbok, impala, while the hyrax occupies the cliffs.

And speaking of cliffs, the best view of the lake is from Baboon cliff. 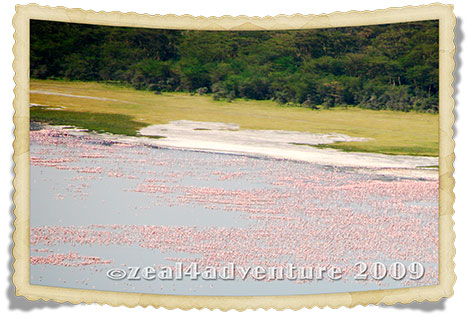 view from the top

Lake Nakuru is also home to the Kenya Rhino Conservation Project and therefore an excellent place to see rhinos.  The woodland and forest are now home to both black and white rhino.   Following the ravages of poaching, in the late 80’s, only 2 black rhinos remained.  Creating a rhino sanctuary within the park and reintroducing a breeding herd have recognized the park internationally as an important conservation area.

Lake Nakuru… not to be missed when in Kenya.  It was definitely one of the of the highlights of my African adventure!

6 thoughts on “Pretty in Pink!”