The best way to see Alaska’s wildlife is on the water, so we were told.  We had a simple goal – to search for, view and learn about a variety of North America’s wildlife.  We therefore plied the island-studded waters of Stephen’s Passage inside a warm, comfortable cabin on-board a water jet-powered catamaran, specially designed for wildlife viewing. Stephen’s Passage is renowned as a favored summer feeding ground for humpback whales.  We decided to go for it in Juneau because the operators guaranteed whale sightings or a $100 refund.  Sounds like a winning proposition to me.  And whales we did see + some seals to boot. 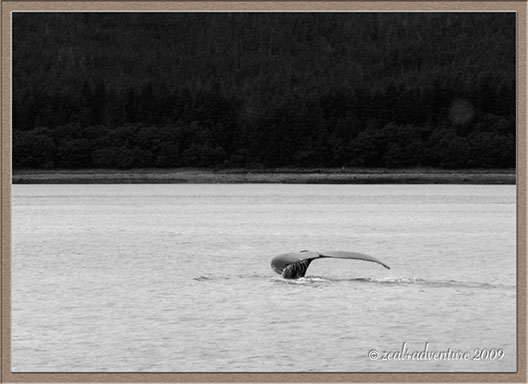 We saw graceful and magnificent whales tail lobbing – raising their flukes out of the water and then slapping it on the surface — blowing and perhaps even singing, a most interesting behavior of the whales, a naturalist on-board explains.  I couldn’t hear because it was too cold and windy for me so I stayed indoors the whole time, taking photos through the large windows surrounding the whole cabin. 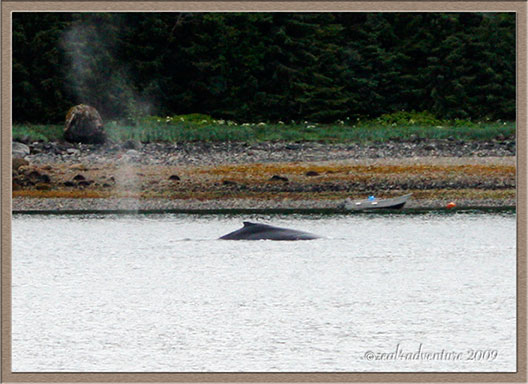 The naturalist explains further that humpbacks are a baleen whale and a rorqual whale that sings amazing songs, long and complex, which they believe is used for mating.  They are acrobats of the ocean, breaching and slapping the water.  They live in pods (a social group of whales) and these mammals travel a great distance to take advantage of the best breeding grounds and feeding spots.  North Pacific humpbacks, for example, mate and give birth in Hawaii and then travel to Alaska each summer to feed. 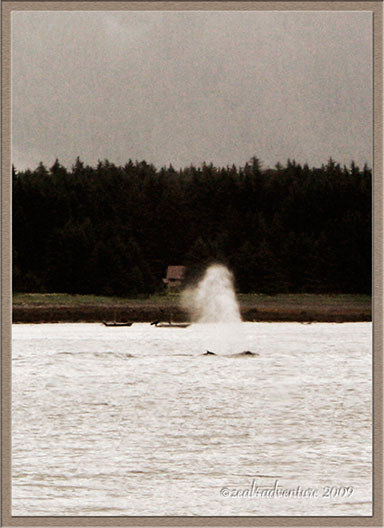 Humpbacks are among the most endangered whales and fewer than 10% of their original population remains.  However in recent years, humpbacks have been observed more and more frequently feeding along the California coast. 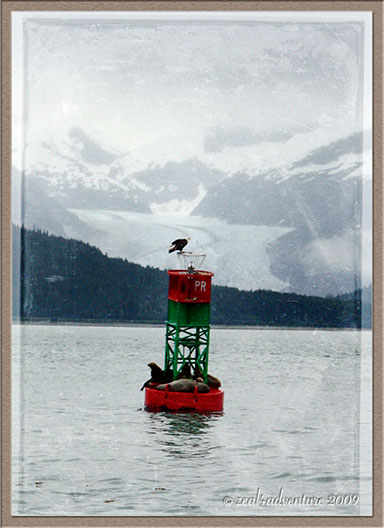 Normally hauling out on rocks, these seals seemed to be enjoying the rest on a buoy.  They often swim quietly along the shore, their round, earless heads just breaking the surface.  Seals depend on a thick layer of body fat for warmth.  Their coat consists of coarse short hairs.  Color varies from blond to nearly black, may are spotted and blotched. 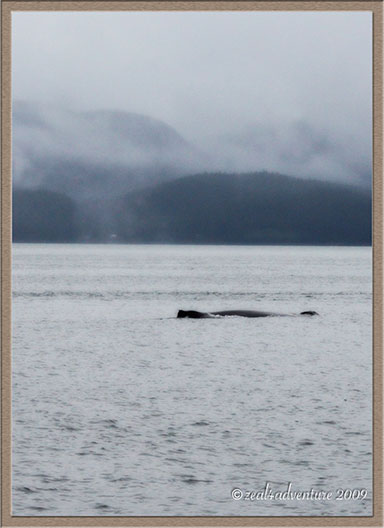 Humpback whales can consume as much as a ton of krill and small fish per day in the summer?

Humpbacks migrate to the nutrient-rich waters of Southeast Alaska in the summer after having fasted all winter.  This intensive feeding builds a thick layer of fat called blubber which stores the nourishment the whales will need in autumn when they return to the warm waters of Hawaii and Mexico to breed.

For more scenes from around the world, go to Scenic Sunday.

6 thoughts on “A Glimpse at Alaska’s Wild Side”