Our journey to the east coast of Taiwan began when we got off the cab at the Taipei Train Station with our backpacks in tow. 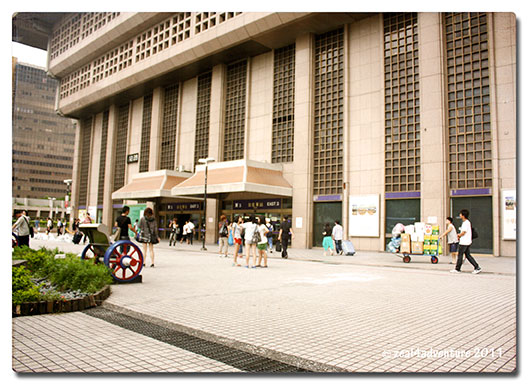 The station is a large building housing several rail services with an array of shops and restaurants on the 2nd floor. 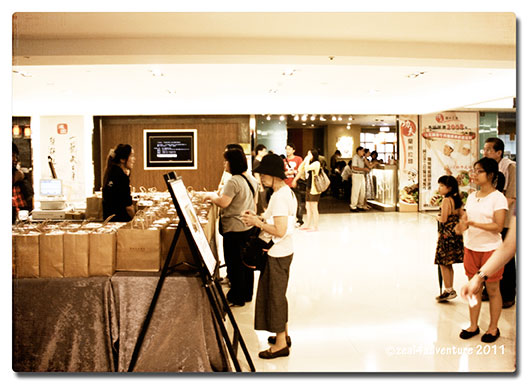 Getting ourselves acquainted with the station the day before we thought would prepare us for a stress-free travel.   Not quite!

Taroko Gorge, one of the most fascinating areas of Taiwan, is accessible by plane or train.  Unless pressed for time, we like traveling by land, in this case by train.  While we are able to see more of the place, it is likewise a cheaper way to travel.  Sincheng (Hsin-Cheng) station is the closest station to the Taroko Gorge National Park and because our hotel is located within the park, we took Lonely Planet’s advice and bought our tickets to Sincheng,

which we soon realized, is a small station in a small town.  The more common route to Taroko is through the Hualien station (a different train passes that station).  That however is still an hour’s drive to the National Park.

To make matters worse, on the B2 level where we were to board, there are 2 lines going on opposite directions.  The ticket didn’t give much information — it was written in Chinese save for the word “Sincheng”.  It didn’t specify which train/line to take, at least not in English.  All we had were the platform number and the time of departure.  None of those we approached (young or old) could help us because they either did not speak much English or they didn’t know where the hell Sincheng is.  A and I looked at each other and without speaking burst out laughing reminiscing about our bus mishap years ago, very aware that what happened in Uganda might just repeat itself in Taiwan. It really wasn’t something to laugh about but…

We eventually found (and I assume was) a customer service booth.  And with the little mandarin I know and a lot of pointing, we boarded our train hoping for the best.

Three hours later we found a cab parked outside the Sincheng station and in 10 minutes, we were unloading our backpacks at the Leader Village Hotel, our home for the next 2 nights. 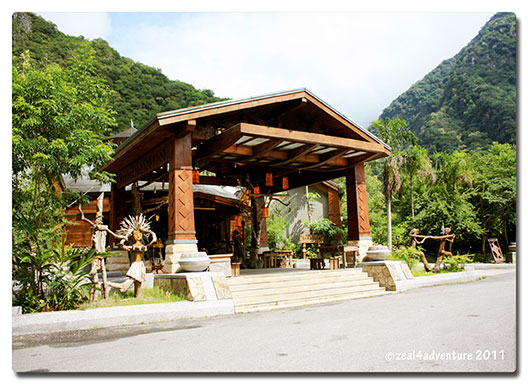 Winding through a zigzag road, the drive to the front of the lobby melted away the tensions of the day.

A welcome party greeting guests at the driveway.  Fun sculptures are found around the hotel grounds.

Spectacularly situated on the Buluowan plateau, the Leader Village Hotel, surrounded by green mountains, was a sight to behold.

Set in fabulous scenery, native aboriginal themed wooden cabins were built in clusters all over the hotel grounds.

Known too for their restaurant, meals were a combination of western and aboriginal dishes.

Aboriginal dishes came as a set meal (middle pic): an order of grilled tilapia with different vegetables including sweet potatoes.  It also came with sticky rice on a bamboo.  Steaks were tender, superb when sprinkled with a dry spice mixture.

The staffs are mostly Taroko aborigines and after dinner, we were treated to a cultural show performed by the children of the Truku tribe. 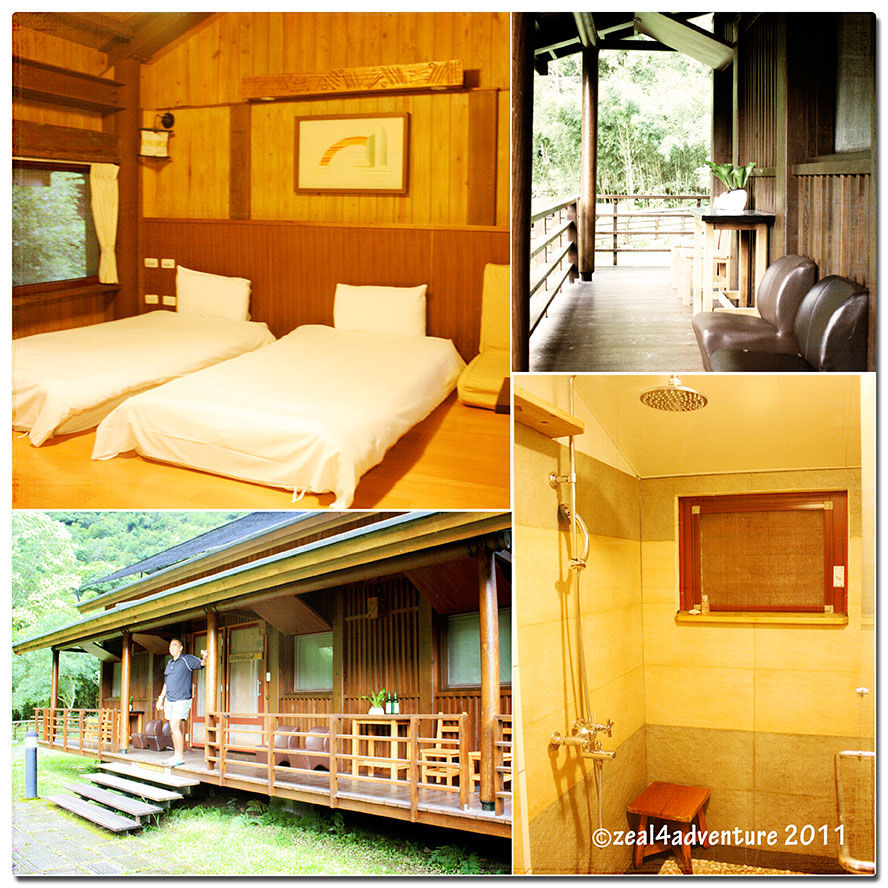 The cabins are spacious, clean and rustic complete with modern amenities such as rain showers and TV.  Although the beds set on the floor is quite charming, getting out of bed was an effort… a sign that age is creeping up on us!

The best part though is to wake up to this.  I could sit on our porch the whole day and I’ll be a happy camper. 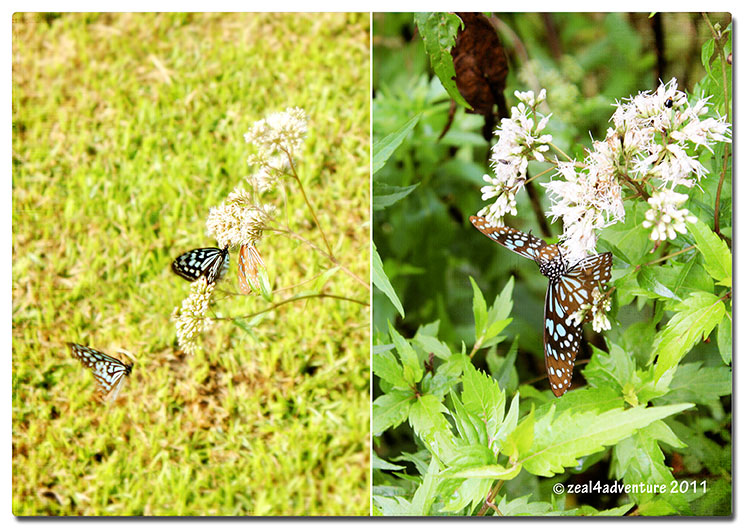 Just in front our cabin.  The grounds so green, butterflies abound.

But laze around we didn’t do of course as the beautiful grounds invites to be explored.

Dramatically set above the gorge proper with fabulous scenery everywhere, Buluowan was where the Taroko aborigines once lived and held festivals and celebrations.  Divided into the upper and the lower terrace, the hotel is on the upper while several trails, a recreation area including an exhibition hall are found on the lower terrace. 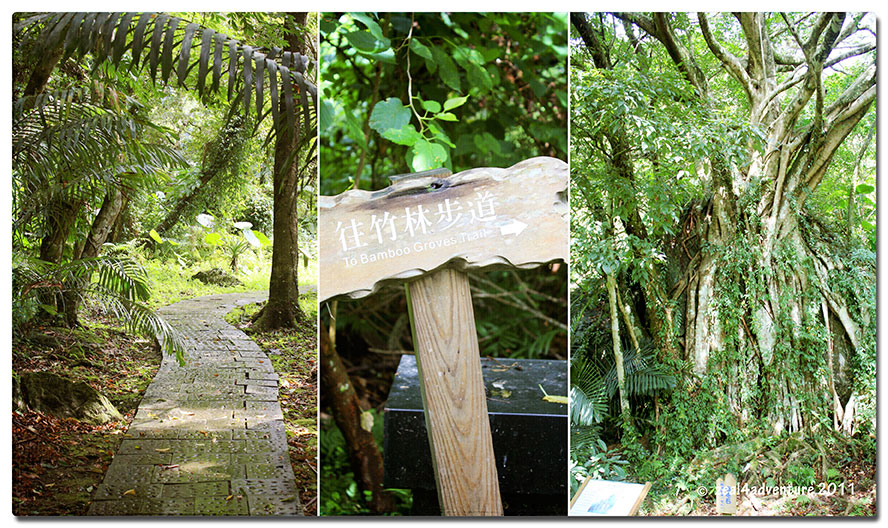 After breakfast, we explored the upper terrace.  Behind the hotel is a short nature trail aptly called Bamboo Grove Trail.  It was a cool walk through a bamboo grove.

It wasn’t so bad after all.  All is well that ends well.

More of the lower terrace up next.

10 thoughts on “Taroko: An Edgy Start”