An article I read about the vineyards in Muslim populated Morocco got me interested in Meknes. Despite its religious stricture on consumption, thanks to its gentle climate, generous sun, and rich soil, the Meknes region is home to many vineyards and olive groves. I considered a vineyard tour but, to be honest, I completely abandoned the whole wine tasting idea at the last minute in lieu of the very impressive Volubilis. And because walking around the ruins of the Roman settlement took just a little over an hour, we had more time to visit the city of Meknes.

Much less visited than its neighbor Fes, the most unpretentious of imperial cities—Rabat, Fes, Marrakesh being the other three— as it was developed as a capital late in the history of Morocco and only briefly, by a single sultan, Moulay Ismail. Meknes, despite its humble past, rewards travelers with beautiful gates, ramparts, mosques, and palaces and is often referred to the Versailles of Morocco.  As one of the imperial capital, Sultan Moulay Ismail built the city’s vast imperial palaces and massive walls to rival King Louis XIV’s Versailles hence the reference. Suffice to say, his tomb rests here. The weather turned cold and wet, which prevented us from wandering around much, we nevertheless managed to visit a few sites.  We would have loved to see the inside of Ismail’s granary (Heri es Souani), but it was close on a Sunday.

At the heart of Meknes linking the medina and the Kasbah, the large square is lively in the afternoon, 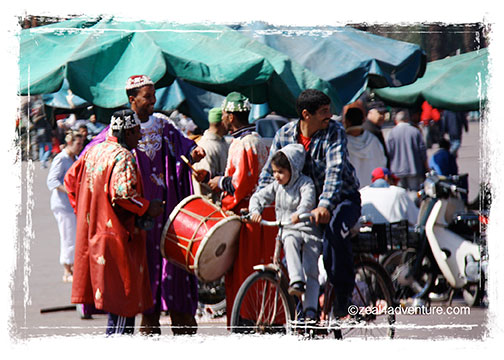 much like but a lot tamer than the Djemaa el Fna of Marrakech (you will know what I mean on my future post).  The outstanding architectural detail of the walls and gates (especially of Bab Mansour) makes for a more compelling square than Place Seffarine and Boujloud.

From the main entrance, an archway leads to a triple-arched entrance.  A small yellow room with a small fountain in the middle greets as you enter the mausoleum. 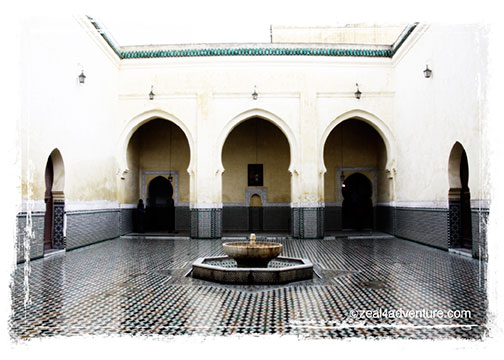 This leads to the first of several open aired courtyard surrounded in all sides by bright yellow walls.  The last courtyard fronts sanctuary where the tomb is.  While non-Muslims are not allowed inside the sanctuary, it was possible to have a glimpse of the tomb from the antechamber. 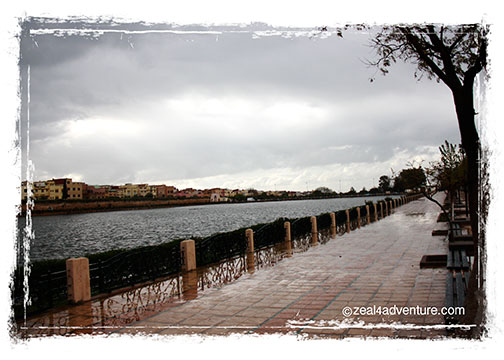 It was said that the lake, measuring 319m by 149m, was constructed to ensure the supply of water to the town in case of drought or siege.  The reservoir is connected to the water system of the city, which was considered an ancient engineering wonder.

This is the exterior of Heri es Souani, the ingeniously designed stables of Moulay Ismail.  To keep the temperature cool and air circulating, the structure was built with tiny windows, massive vaults and an underground water channel system.  The gigantic storerooms provide stabling and grains for 12,000 horses.  Too bad we were there at the wrong time and couldn’t see the inside, they say it is bewildering.

4 thoughts on “An Outing Outside of Fes: Meknes”