Though still pretty much under the radar, this sleepy town is fast becoming a foodie and adventure destination. On our way to Penang, we stopped by Ipoh in Perak to see what some travel enthusiasts are raving about. We arrived on a Sunday and lo and behold, half of Ipoh was indeed asleep. Shops and quite a few restaurants were closed. 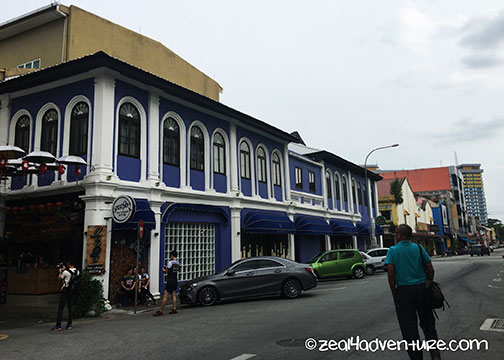 Steep limestone cliffs flank the capital of Perak, some with cave temples pocketed in the limestone. The state of Perak has much to offer regarding outdoor activities such as white water rafting and jungle treks. Although we skipped that as a previous injury prevented such activities, for now, we will perhaps go back one of these days to explore that part of Perak. 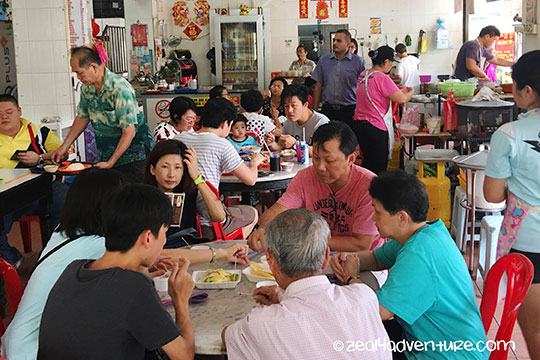 We spent the two days centered on the food and exploring the old town with a side trip to Batuh Gajah, just 30 minutes out of Ipoh.

Ipoh is shaped by the 1920s tin-mining boom, its wealth and population however ebbed away after the mine’s closure. It is now better known for its excellent food. Perak’s most beautiful colonial architecture stands side by side with shabby coffee shops.

We had a blast sampling their food specialties and discovering some fine street arts that scatter around town.

The first thing we did was to sample Ipoh’s quintessential dish that is bean sprout chicken or Tauge Ayam. 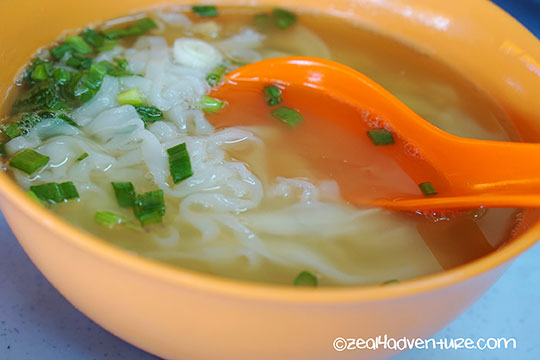 poached juicy and tasty chicken and the most delicious beansprout I’ve had.

Lou Wong’s, as recommended by the hotel and some reviews, serves one of the best. As with many of the traditional eateries in Ipoh, Lou Wong was unpretentious with round tables and stools and no aircon. We were there early, but the place was packed not long after we were seated.

Wandering through the lanes of Ipoh’s old town reveals a scattering of stencil art murals. Some quirky and easily spotted while others are subtly woven into the streetscape.

A few were done to decorate establishments. While there are some pieces done by Zacharevic, the mural artist that started Penang’s street art scene, other artists have joined in the scene as well.

A guided tour of the museum will provide a good insight into the history of the Chinese in Ipoh. Originally the house of the Hakka Tin Mining Club founded in 1893.

The unique museum has on display artifacts, collectibles, and photographs from the 19th and 20th century. This gives you a chance to step back in time and see how the Hakka tin miners were tempted and tormented by the 4 evils, which were Opium, Gambling, Prostitution, and Triad.

The founder, Leong Fun, arrived in Penang penniless in 1876. With a lot of luck and hard work, he found success in the tin mining industry. Since “Towkay” Leong Fu found the exclusive membership club, it has always been a place of mystery to non-members. Although it has opened its doors to the public now, the entry remains to be special as it is by appointment only.

Appointments can be made via the website or by queuing at the door.

This two-story shophouse is right beside the Han Chin Pet Soo Museum and belongs to the Ho Family of the famous Chinese Herbal tea brand, Ho Yan Hor. Following the successful restoration of next door neighbor, Han Chin Pet Soo, the family decided to open the shop after it was left vacant for so many years and had ipohWorld run its tours.

Also steeped in history, the visit will reveal the brand’s rise to popularity. Complimentary teas for tasting cap the end of the tour.

Concubine Lane in between the two structures as seen from the balcony of Han Chin Pet Soo.

The same “towkays,” mining tycoon Yao Tet Shin, in particular, said to have given away 3 lanes as gifts to his 3 wives. These are Wife lane, Concubine Lane, Second Concubine Lane.

Concubine Lane or the 1st Concubine Lane is the one that has transformed into a hip street in Ipoh with cafes, boutique hotels, food, and souvenir stalls. 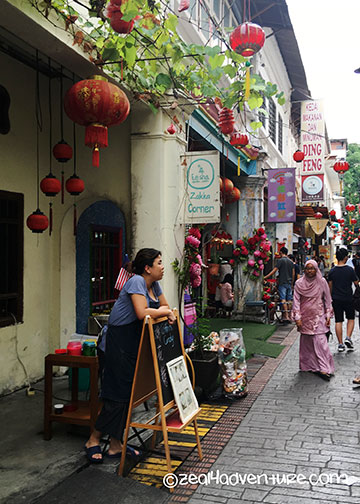 Two days is really not enough to explore all of Perak. With the limited time that we had, we decided to pay Kellie’s Castle a visit.

The unfinished ruined mansion built by a Scottish rubber plantation owner named William Kellie Smith is located just 30 minutes away from Ipoh. The castle has Scottish, Moorish, and Indian influences and had multiple passageways. 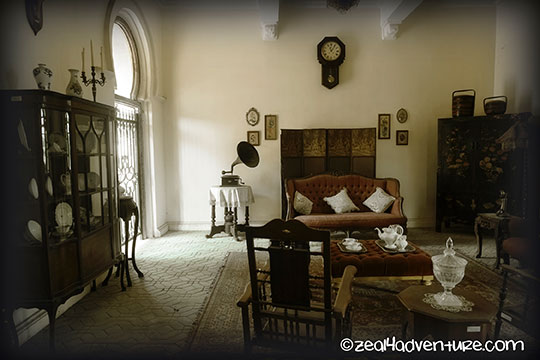 A replica of what the living could have been.

It was intriguing and eerie to wander around the ruins. It was never completed because Smith suddenly died of pneumonia in Lisbon. His wife, Agnes later packed up and left Malaysia with her children and never returned.

She sold the castle to a British company. The only thing left of the home is the covered walkway, an open courtyard, and part of a crumbling wall. Kellie’s castle has been refurbished and was even used as a set in the 1999 film Anna and the King.

A friend mentioned that a foodie will always find their way to Ipoh and Penang, but I say that a non-foodie who loves adventure and history will find Ipoh to be worth a visit. But definitely go for the food. 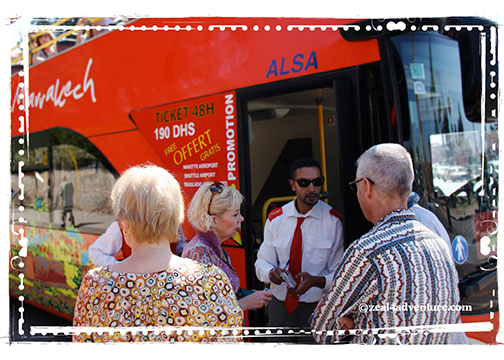 I don’t normally do this.  I like exploring a place on my own, by foot as much as possible.  But somehow in the flurry of things, I agreed to hop on this bus (price of which is outrageous by my standard – but what the heck!) and surveyed the city. 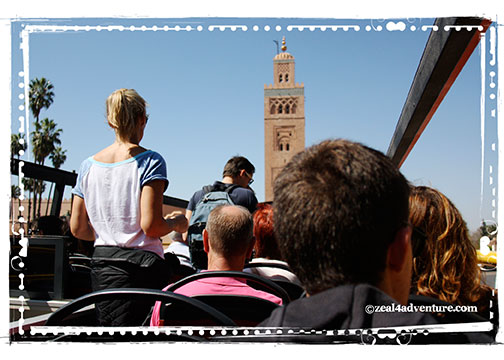 We got on near the Koutoubia Mosque, made a quick drive through around the entire city and got off where we got on.

A glimpse of where the hop on hop off bus took us. 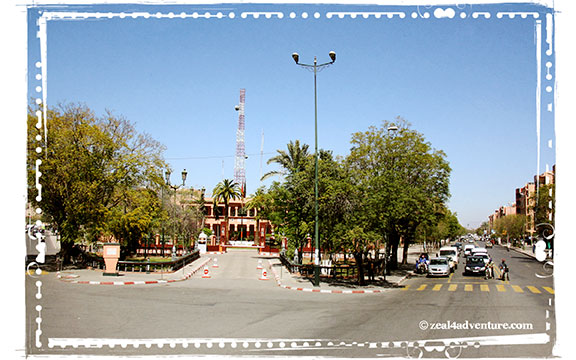 Av. Abd. Khattabi — This major route connects Casablanca and the road to Agadir. 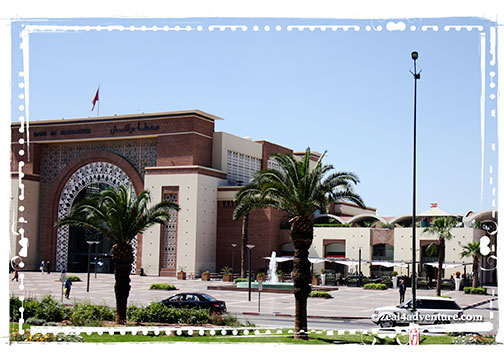 Avenue Prince with the Atlas Mountains as backdrop. 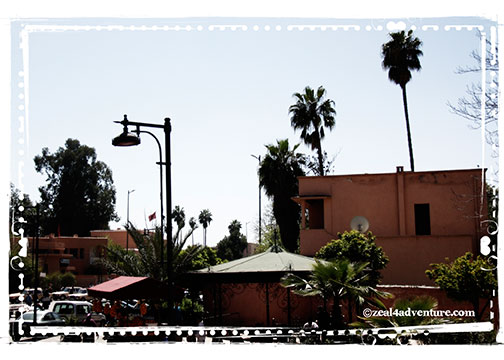 With that overview, we thought that the southern part of the medina was a good area to spend the rest of the day.

Approaching the Kasbah, a few steps away from the medina, one immediately sees the Kasbah Mosque, probably the 2nd best-known mosque in Marrakech (Koutoubia being the most famous).

Built in 1190, the 12th century, historic mosque (known locally as Moulay Yasid Mosque) still features some of the Almohad architecture.  As with most mosques, non-Muslims are off-limits.

Attached to the mosque are the Saadian Tombs, one of the most prominent sites in Marrakech.

Set in a small ancient walled garden, the 16th century dynastic tombs of the Saadians are among the finest example of Islāmic art.

Dotted around the shrubbery are the early mosaic graves of lost identities.  These tombs were discovered preserved, unchanged since the glory days of the Saadian rulers.

When discovered in the early 20th century, the entrance was blocked, which may be the reason it remained untouched for hundreds of years.

A short walk through the Kasbah’s streets will bring you to the Badi Palace.

A sultan’s palace, the elaborate 350 rooms, 16th century residence had ornately decorated rooms in its day. 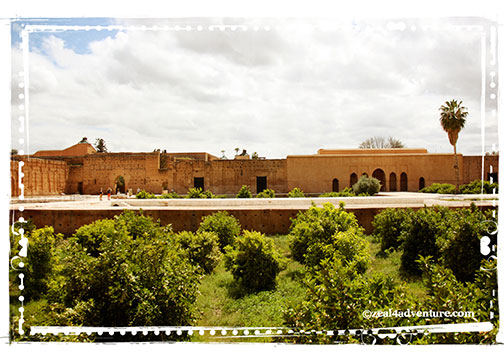 Walls and ceilings were encrusted with gold while the inner court had an enormous pool in the center and flanked by 4 sunken gardens.

Today it is a denuded ruin when thieves emptied the rooms of valuables after Meknes became the capital in the late 1600s.

And storks and pigeons had found a home to build their nests in its walls.

Still, these are rubbles worth exploring.