On an extensive and beautifully landscaped grounds lies this once lavish early 20th century concrete that showcases what is left of Don Mariano Ledesma Lacson’s ancestral home also in Talisay City.  This mansion has a lovely story and this sign tells it best.

Notice the shell-inspired design at the top of the structure

It was said that out of depression and a broken heart, this mansion was built after the death of Don Mariano’s his first wife, Maria Braga, a Portuguese from Macau and became his residence with his unmarried children.  It had in it one of the finest furniture, chinaware, and decorative items as the father of Maria Braga was a captain of a ship that sailed across Europe and Asia.  He would bring with him these items.

The massive and indestructible stonework almost stood against the inferno that engulfed the house in 1942.  The guerillas first ignited three drums of gasoline, which failed to even burn the 3-inch wooden floors.  On their second try, they had to mix three drums of used oil and a drum of gasoline which subsequently destroyed all the woodwork and brought down the roof as it burned for 3 days.

The mansion was built beside the sugar farm and at the background is a simborio.  It’s the local name for smoke stock or chimney.  It was a vent used for the muscovado mill.

Fast forward to present day, Pacita Lopez Heredia won the 3.6-hectare farmland, which included this structure in a lottery held by the heirs when the vast plantation was partitioned among them.  The cost of rebuilding was so unfathomable, even the priests refused it when it was offered to them as a donation.

That being the case, her son Raymond Heredia Javellana started rehabilitating the ruins in 2006 turning his family inheritance into a tourist attraction and café.  A dream come true for Javellana. 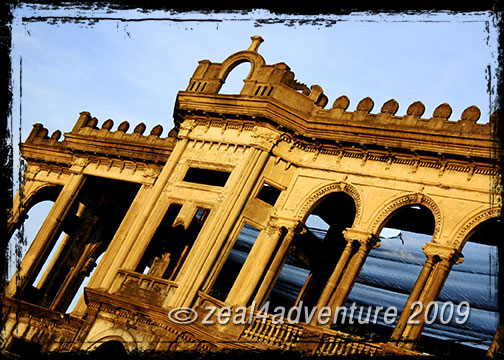 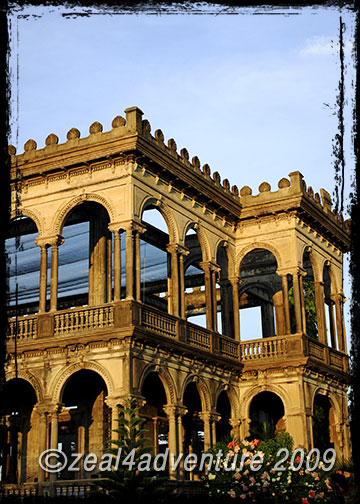 Even when reduced to skeletal frame, the 2-storey mansion is breathtaking especially when bathed in the golden glow of sunset. 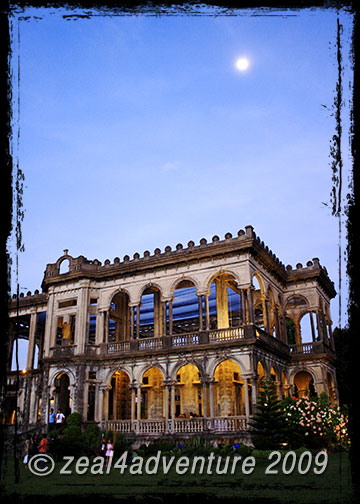 Best enjoyed during dusk and if you stay a little longer, this is what you’ll see.

Can you see that blurry image?   😯