If you relish the sand and the sea without the noise and the socials of Boracay, Sipalay is for you.  Touted as the Jewel of the Sugar Island, Sipalay is actually Negros’ best-kept summer destination. 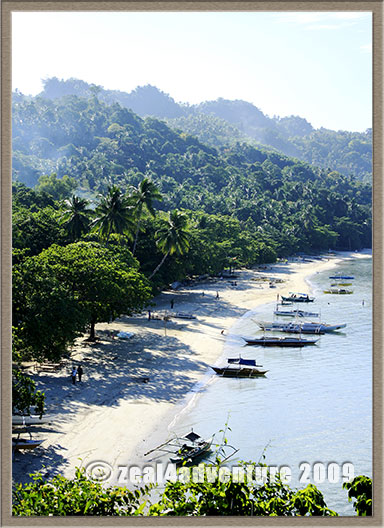 The people from Western Visayas almost always speak highly of the white sand beaches of this seaside town but when a friend (not from there and a foreigner to boot) raved about it, it was time to go.  To satisfy our curiosity, what better time to explore this much talked about but (except for people from Bacolod and perhaps Dumaguete) hardly explored island?  It was a long holiday, it was at the height of summer and we were all in need of a break from the urban jungle.

After sweating it out at the foothills of Kanlaon (some even got to the top) and after stuffing ourselves with not only the goodies but also of the cultural schtuff, it was time to chill.  The drive to Sipalay took between 3-4 hours, and it builds up to a more scenic drive as the town nears.

I had no expectations really but Nataasan Resort was pretty charming.  It was the only one perched up on a cliff without any beach to boast.  To get to the beach, one must climb down these stairs 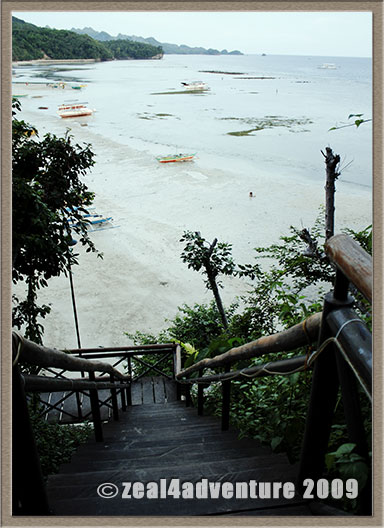 but the view, the view makes going up and down a non issue. 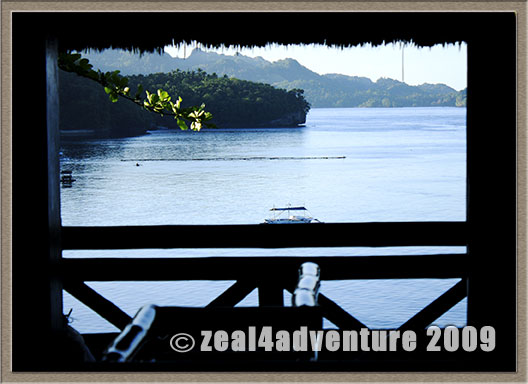 My brother’s family, on the other hand, stayed at Artistic Diving so we can use their dive facilities and where there’s a pool for the kids.

With a lot of dive resorts scattered around the island, we figured that diving must be a big thing here and it was… in a macro kind a way.  There were no pelagics but with a good dive master (to spot), there were some never seen before stuff and without a camera, you’ll just have to take my word for it.  There was one really huge cuttlefish, some seahorses, and some really strange but fascinating stuff down there.  And the corals were just amazing, sadly though we saw huge amounts of Crown Of Thorns (COTS).   😦

Snorkeling, I heard was a bit disappointing for the discriminating.  Some enjoyed it though, especially the kids.  There are 2 stretches of beach, Sugar (or Langub in their native tougue) Beach, known for its sugary fine beach and Punta Ballo (where we stayed) has at least a kilometer of stretched white sandy (also fine) beach, both supposedly boasts of good snorkeling.

The 3 days that we were there got us to explore some attractions such as Tinagong Dagat, a hidden sea sprinkled with a dozen islets covered with lush vegetation.

They said it was near Sugar Beach but the banca (boat) we took was not big enough (or so we thought and felt) to fight the swells of the ocean.  It was one scary ride and coming from some of us who had experienced a lot of scary stuff, it was scary!  I guess, it was scarier because we had 2 kids, ages 4 and 8 with us.  And so it was the longest short ride we ever had!   😯 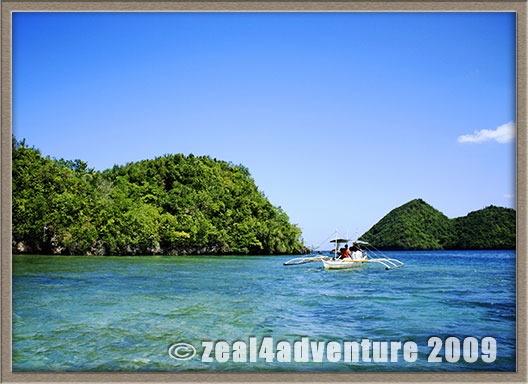 Quite disappointing was Campomanes Bay especially after a nice memory of it some 7 years ago when we visited from Danjugan Island.  It was noted to be an excellent spot for snorkeling and diving but again from the discriminating bunch, it was middle of the road.

The best of this piece of heaven, in my opinion, are the incredible sunsets (and the sunrise caught one early morning before our dive). 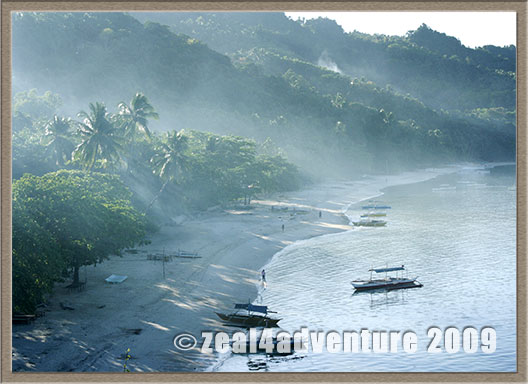 The sunset for me made the whole Sipalay trip worthwhile. 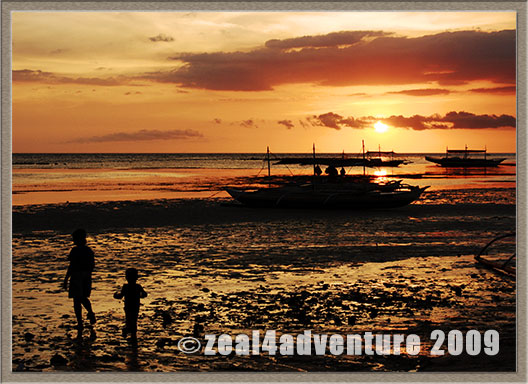 Many including this set of foreigners took pleasure in just enjoying the sunset. 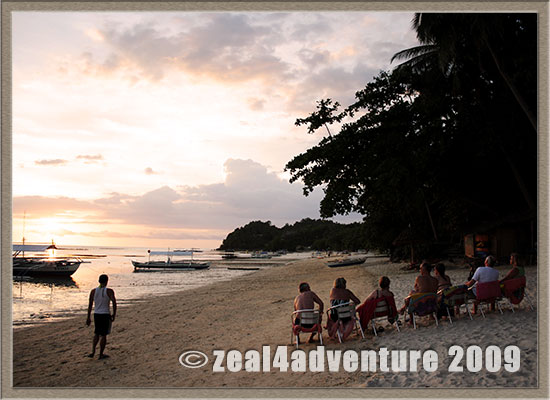 And during this time in Punta Ballo, the beach was brimming with activities… mostly of children playing. 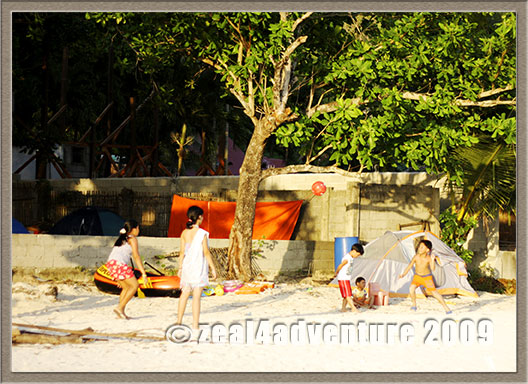 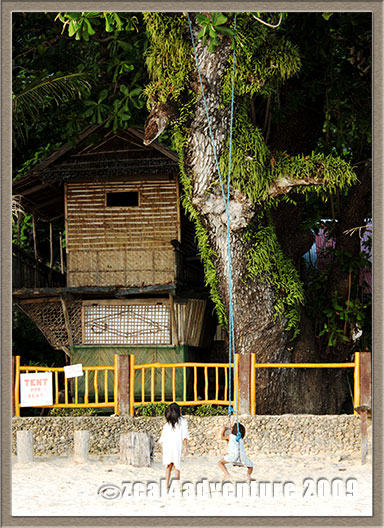 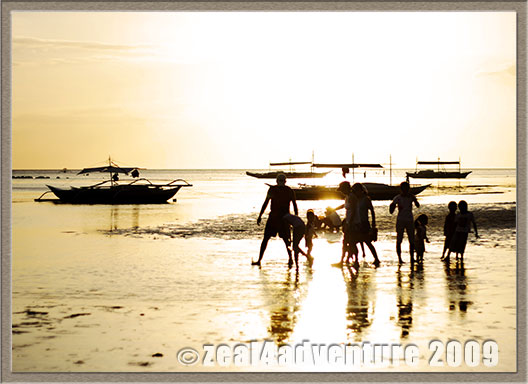 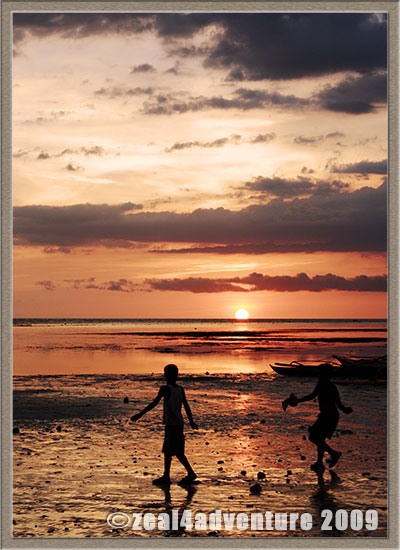 As I said, if you are looking for a place to party, Sipalay is not for you.  It’s a remote seaside town surrounded by spectacular white sand beaches, secluded coves, scattered islets, dive reefs and waters teeming with unique marine life.  A perfect place to unwind and recharge.

For a glimpse of other spectacular worlds, click here.

20 thoughts on “Sipalay: Jewel of the Sugar Island”