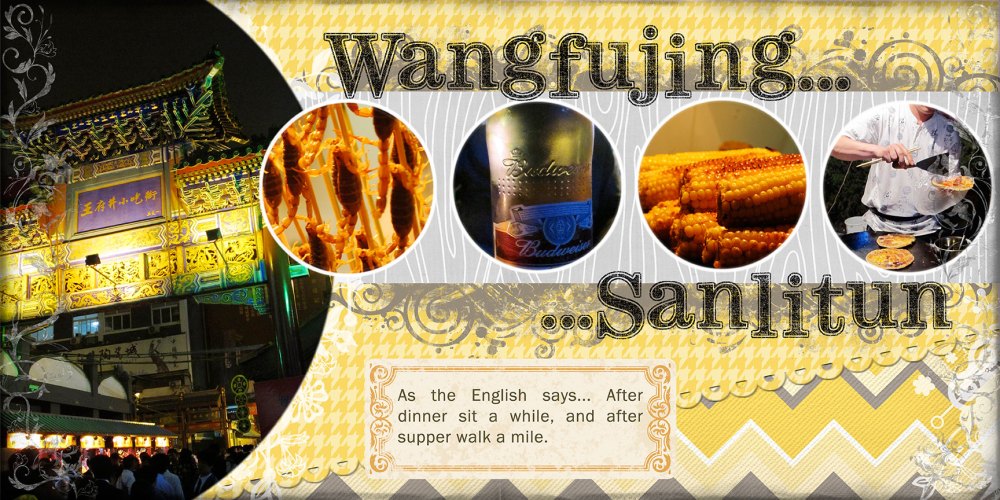 A “Snack Street” and a “Bar Street”, both alive till the wee hours of the morning, both swarming with street food – some made me squeamish while some whetted my appetite.  Two popular night scenes not to be missed when in Beijing.

Just off Wangfujing St., located pretty much in the center of Beijing and a 10-minute walk from where we stayed.

After a hotpot dinner at a nearby mall, we walked along Wangfujing St., a portion of it is off limits to cars and other motor vehicles.

The food market was crowded with people, but they say this is quite normal as it is a famous snack street among locals and foreigners alike.  I was not prepared for what’s to come though. 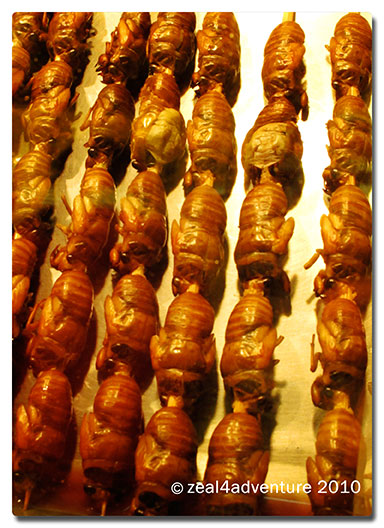 The first few food stalls had as displays bugs and scorpions on a stick, bizarre foods that would probably delight Andrew Zimmern no end but not me.

Even beautiful sea creatures such as seahorses and starfishes.  I was horrified.  Poor creatures.  I now know that there are foods that I cannot eat, what a revelation!!  But not all food stalls are alike,

there were others that had me wish we skipped the hotpot meal and went straight here. 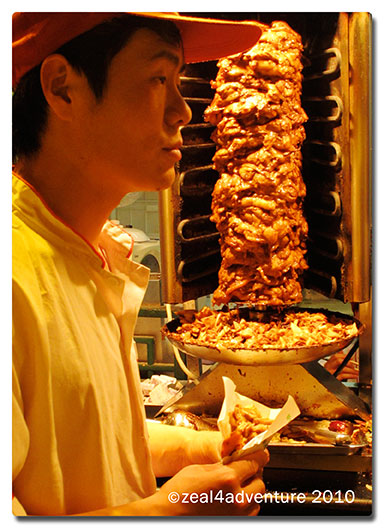 There were wonderful smells of lamb kebabs, shawarmas, grilled meats, roasted chestnuts and many, many more.

A great place for a cheap sumptuous dinner, sans the bizarre foods of course.

One of the best known bar street in Beijing, Sanlitun is located in Eastern Beijing in the Chaoyung District.

Hidden away in the small alleys of Sanlitun are many small bars and cafes.

This has been one of the most popular entertainment area for foreign expats, recounts my brother who used to work in Beijing in the late ‘90s.  What used to be a small street with bars has turned into stretches of bars and trendy restaurants.  Hardly recognizable, he says, as we weave through the streets in search of his favorite hangout spot 12 years ago. 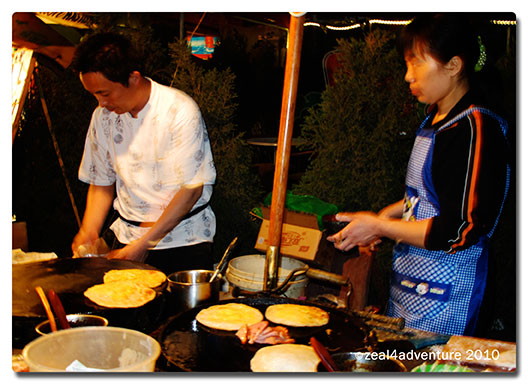 Before taking a cab back to our hotel, we came across this stall selling some sort of a wrap

made up of char siu pork and fried egg with some sort of sweet-savory sauce and lettuce to finish off.

Better then the breakfast offerings at the hotel.

6 thoughts on “Beijing at Night”