Taroko Gorge.  Travel buddy Art, a globe wanderer for more than 3 decades, largely influenced our trip to the national park.  He’s gone to so many places, he inspire me to never stop travelling.  Ethiopia, Uzbekistan, Iran, Bhutan, Antarctica – name it he’s been there.  And to give a thumbs-up on Taroko Gorge?  I knew we chose a winner and wasted no time booking our flights.  With tips from Art, we planned the trip as efficiently as we could.

We had to make good use of our limited time hence the 2 nights stay at the Leader Village Hotel.  Perfectly located within the park with its headquarters just a short walk down. 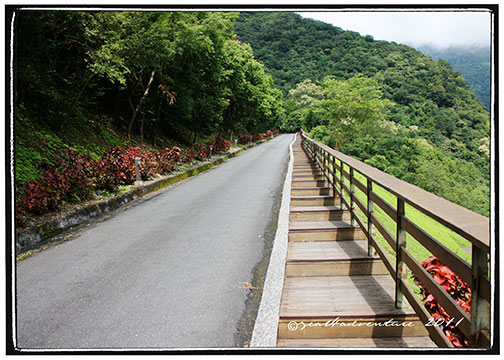 From the lobby, following the wooden walkway that borders the road leading to the park’s headquarters, I was rewarded with a bird’s eye view of the lower terrace.

A beautiful sight that had me thanking Art for his recommendation.

The Traveler’s Center from E-das Hall

What used to be the home of the Taroko tribes more than 3,000 years ago is now the Park’s headquarter, which includes a recreational area (also called the Traveler’s Center)

featuring aboriginal cultures, a multimedia presentation at the E-das Hall, and a souvenir shop.  Also found here are the Swallow Grotto trail and the Meander Core Trail.

While aimlessly walking around, a guy called out prodding us to enter the E-das Hall as “the show’s about to start”, he said.  Happy to be away from the heat even for just a while, we comfortably seated ourselves and watched the entire show… in Chinese with no sub-titles to boot.  Who cares when we can cool ourselves on a hot summer’s day?  The show briefs about the different attractions to be seen and experienced at the park and the visual presentation had us eager to explore the park.  So right after the show, we went on our first trail.

Behind E-das Hall is the Swallow Grotto Trail.

On the map though, it ends on the highway and A was hesitant to walk this trail because we might end up backtracking.  I insisted and of course he was right.

The steep steps down seemed never ending, and when we reached the end of the road, we were rewarded with this.

An obstructed view of the Liwu River.

I cringed because I insisted and was wrong, and we had to go back up those steep steps.

Next time I will listen. 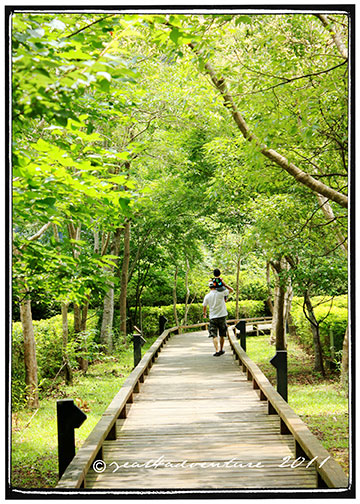 Now this trail is a breeze with beautiful scenery and lush flora along the way.

It’s a shorter trail that starts near the traveler’s center.

The pretty wooden walkway leads all the way to a viewing deck at the end. There, we were rewarded with these views.

The Taroko Gorge (left) and the Sipan Dam (right)

After these two trails, a hearty lunch was the only way to go. 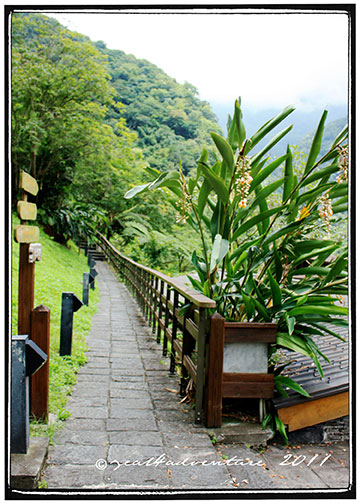 We walked back to the hotel through a more scenic and shorter route,

A rooftop picnic area at the Traveler’s Center

which passes the back of the Traveler’s center.

All these stunning scenery left us awed by the beauty of Taroko and we have not technically left our hotel grounds yet.

5 thoughts on “Buluowan, the Lower Terrace”