Plan to stop at nearby Queluz on your way back to Lisbon from Sintra.

The national palace is worth the detour.  Be sure though to buy a ticket to Queluz, or you won’t be able to get off at your end destination. That was what happened to us when we decided mid-way to get off at Queluz instead of heading straight back. When we arrived at the Rossio station, the tickets we had were void, and we couldn’t get out. Apparently, the time started ticking once we got on the train and what should have taken 45 minutes took us 2 hours. We should have bought another ticket back to Rossio when we got off at Queluz — explained Mr. Operator. With many apologies, we asked to be freed with the promise of paying what was due. Kind Mr. Operator let us out, even waved our arrears. Smiling and shaking his head, I wonder how many mindless tourists did the same thing?

It was, however, worth the hassle. Queluz is a rather unremarkable suburb but its National Palace, in its pink Rococo glory, is a remarkable example of Portuguese Romantic architecture. Although smaller, it shares much of Versailles’ sense of grandeur in its ornate decorations and exquisite gardens.

It is because Portuguese architect, Mateus Vicente Oliveira designed it in homage to the famous palace outside Paris France. Built as a summer retreat for Dom Pedro, the famous Duke of Braganza, who later married his niece, Queen Maria I. 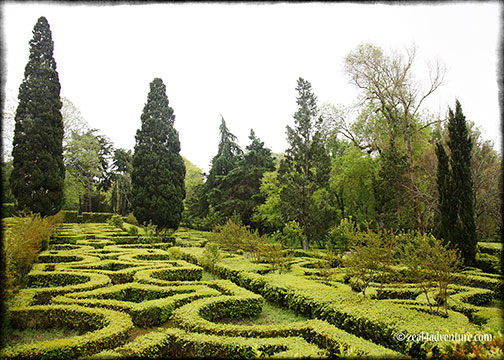 Famed for the glory of its gardens, which include a large topiary parterre, formal terraces and fountains at the rear of the palace. The interior’s attention to detail is no less than that of the exterior. 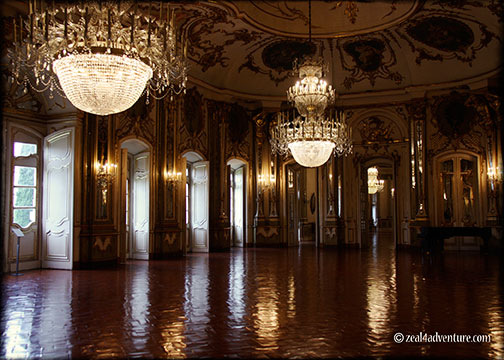 The palace is a 10-minute walk from the Sintra train line, turning left out of the Queluz-Belas Station. Signs will lead you to a cobbled square with a statue of Queen Maria I. Facing directly into the plaza is the façade of the palace.