When asked where she would recommend we go besides the old town, Ling told us to go to Xizhou. “It may not appeal to everyone,” she said, “but many appreciate it for its cultural heritage.” And with that, Ling arranged for a car to bring us there.

A side note on how sweet she is. She lent us her phone so we can communicate with the driver, who does not speak a word of English, through her.

Where he dropped us off, there was no sign or directions to the village so we walked around until we reached a bridge that seemed to lead to a community. 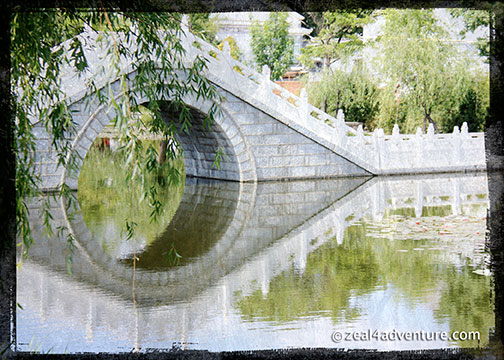 I have to say that albeit quite serene, the area was pretty empty.

It felt strange to not meet a single soul for perhaps a good 10 minutes walking around the village.

A ghost town, we thought and wondered if it was why many didn’t like the village. The houses seemed lived in though so we explored further even though half of us felt like it might be a waste time.

Well, I’m glad we persisted. We realized that the driver, for some reason, dropped us off at the back (perhaps) of the village or that we went the wrong direction (remember we cannot communicate).

Because as we strolled further into the village, passing through courtyard houses, we eventually found ourselves at the heart of the village revealing a vibrant square surrounded by shops selling food, china wares, antiques, and a few souvenirs. 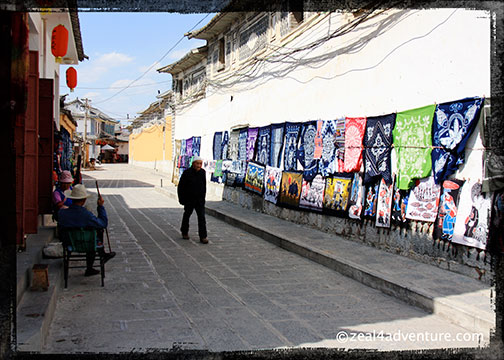 Being an enclave for prosperous merchants and scholars, the Bai people put emphasis on education and achievements. During the Ming Dynasty, they commemorate those who did remarkably well in the imperial exams by having their names written on a stone tablet standing on this square. Something like a “Hall of Fame.”

Xizhou was an important as a trading port along the Tea Horse Road and an essential place for military affairs, once housing a landing strip and radio station for the Flying Tigers during WWII.

Just 20 km away from Dali Gucheng, Xizhou is (still) a sleepy town that lacks the hip vibe of the former. The architecture however fascinates and the square engaging with regular folks going about their business.

In fact, the best part of our afternoon here in Xizhou was watching village life take place as we sip our cup of joe. The ordinariness of Xizhou is what makes it extraordinary.

One thought on “Xizhou: The Other Old Town of Dali”