It was 3 AM (1 AM Manila time) when we arrived at a small, simple looking airport in Yap (looks like one of our small city airports back home).  We were met by Dave, a soft-spoken, burly man who runs Beyond the Reef and who briefly advised us on pick-up times and what to dos for the next few days.  We were tired but elated for what lies ahead. There were only a handful of us that got off the plane en route to Guam (so you think that it would be quick and easy getting through?  We had to wait for one of our friend’s luggage as it did not get off the plane and was on its way to Guam… which they say is a normal thing — Yikes!).  The 5,000 visitors last year were mostly divers.  With a population of only 13,000, this sleepy town is known mostly for it’s marine life, more specifically for Manta Rays.  Sightings are almost always a sure thing.  And so we travelled a long and winding route to this Federated State of Micronesia hoping for some encounters with the Mantas.  Because the flights do not connect, we had to stay the night in Palau both ways, which allowed us practically 2 days to kill.  And killed we did by shopping till we dropped.  Not that we don’t have those PX goods and those dive paraphernalia back home BUT um I rarely go shopping when I’m home.  A lame excuse ya?

Of course we went to several dive sites but I have 2 favorites that I will rave about later. First, let me briefly acquaint you with some of the “not too hot” sites. Not that they’re a real disappointment but perhaps we just weren’t there at the right time.  The first would be Yap Cavern, had fun weaving in and out (as it was my first time in a cavern) but kinda disappointing coz we missed the schools of jacks and the barracudas that usually hang out at the end of the cavern.  What we had was a rare episode, I heard  So I wouldn’t generalize this one experience.  It still is a pretty site even without the schools.  Next was Miil Channel and likewise a let down for us, as the Mantas were nowhere in sight, while the reviews raved of schools of Mantas (sometimes reaching up to 8 at a single sighting) when in season.  We thought that we perhaps brought some bad luck with us?  We found out after, that we were a month shy of the season. No wonder, no mantas!  While Fanif looked like a ghost town underwater with just a smattering of reef sharks (am I spoiled or am I spoiled???), Magic Kingdom on the other hand boasts of beautiful coral beds — reminding me of Twin Rocks in Anilao but pales in comparison to my 2 favorites so hang in there, stay with me and read on.

School of sharks — black tips and gray reefs everywhere. Babies, teenagers, full growns, fat ones, thin ones– all sizes just below our boat. We didn’t even have to swim far.  At one point, I counted 23 sharks. TWENTY THREE!  It’s like watching a 3D movie with front row seats.  Amazing!

We came back on our last day to cap off a great dive trip.  Good visibility, no 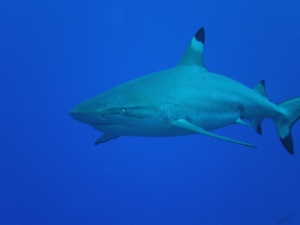 currents, beautiful reefs, plenty of other fishes — sweet lips, surgeons, wrasse, etc. A no brainer.  We just had to have our group shot here, and we did.

The second time around, I counted only 7 sharks wandering around but they were swimming so close, we could almost touch them.  Well, that really isn’t a good thing, is it? But I’m still alive so I guess it can’t be such a bad thing. 🙂  Ok, there are some rules to be followed like stay on the reef, always face and never swim out to the blue (that’s the deep blue water where the sharks are).  And for as long as you follow those rules, you’ll be okay.  I got to see the sharks up close and personal.  Love the black tips with white borders the most.  A perfect finale indeed.

Valley of the Rays

Love the name, and the rays love this place. It succinctly describes this place.  Here, manta rays abound because here, planktons and remoras are aplenty.  They come for the cleaning (from the remoras) and the feeding (the planktons).  I think that is why it is called a cleaning station ya?  Now I wonder if it is also called a feeding station? 🙂

For three days, our schedule looked like this… up by 6, breakfast at 7, on the boat by 8, and at “The Valley” by 9. The mantas are there early, we were told. And they were indeed. As soon as we approached the station, they were there, at least 2 if not 3 at a time (except for the first day when they appeared 7 minutes before I had to deco, read: I only had less than 7 minutes before I have to ascend, or else! hehe!). And they did not disappoint. These gentle giants with wingspan of approximately 10-12 feet wide, were swimming, gliding gracefully above us, in front of us, all around us. Sometimes playing hide and seek, sometimes posing for the camera, sometimes just watching us, hovering so close above us we had to stay close to the ground or risk getting hit.   An experience hard to top, eh?

It’s Sooo Worth It!

We came to Yap primarily for the Mantas, and we got Mantas. E.V.E.R.Y.D.A.Y!  The sharks were a a pleasant surprise and a bonus.  Despite some disappointments, Yap in my opinion is money well spent.  If Mantas are what you’re after, I recommend Yap.  If you want to see more than just Mantas, Palau would be more practical where Mantas aren’t guaranteed but you’ll encounter a whole lot of pelagics.  Best if you can do both.  Close encounter with the Mantas (and sharkies). Check!