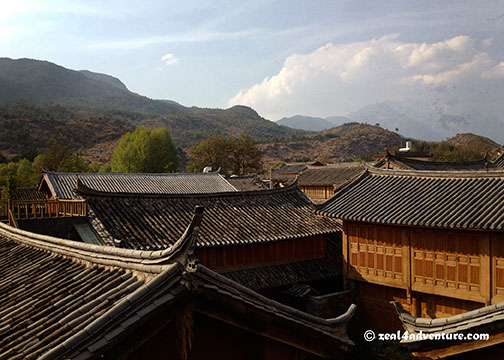 Nestled at the foot of the Jade Dragon Mountain, Lijiang is blessed with gorgeous natural surroundings.

Infused with cultural flavors owing to the profound ethnic heritage of the region, which consequently has lured both the domestic and foreign tourist for perhaps a decade now. 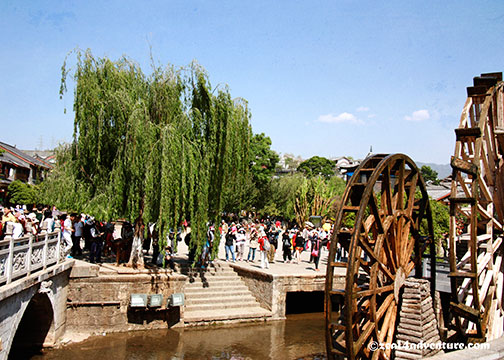 A UNESCO World Heritage Site with Dayan Old Town being the most popular town among a cluster of villages, its history dating back to the Ming Dynasty. A largely Naxi settlement first built some eight centuries ago.  They still live there, and some still make silk embroideries, a trade they practice since the time of the Silk Road. Like Dali, Lijiang was once a confluence for trade along the Old Tea Horse Trail, and Dayan is famous for its waterways and bridges. It is a town south of the Yangtze River, and traffic across the river is made easy by stone bridges.

Of course, now it’s crowded with tourists and the atmosphere of the bygone era is lost somehow.

There’s even a McDonald’s just outside the gates.

Because a peaceful town it is not anymore. Still quite lovely but it has more of a theme park-like atmosphere. 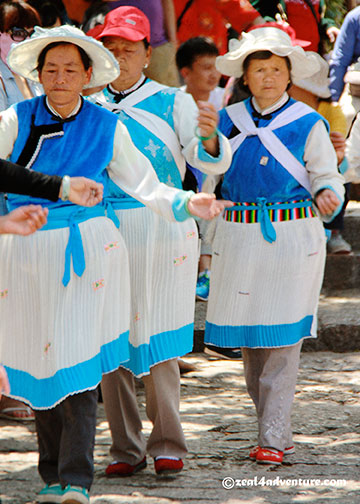 Many are for show, like the Naxi dancing at the central square, not to mention the saturation of souvenir shops.

I wasn’t sure at first if staying outside of town was a good idea but was quite relieved that I chose to stay in another town four kilometers away from Dayan. 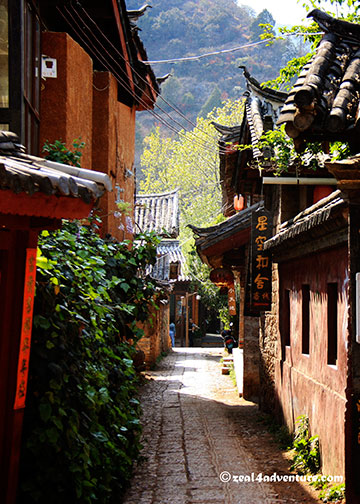 Shuhe is absolutely divine. We didn’t stay in town exactly, but the guesthouse was just a short walk away through this attractive tree-lined street.

A quiet(er) town, Shuhe is a small village hidden in the forest and is another well-preserved city along the ancient tea-horse route.

Nothing as quaint as Shaxi and less hip than Dali but Shuhe has its own charm.

Known to local people as Longquan Village and renowned as a “village of leather,” it was considered as an important part of Lijiang by UNESCO.

The streets are lined with independent shops and restaurants all built of rocks from the surrounding mountains.

The channel and waterways still give water to the houses from 2 crystal clear springs in the northern part of town. They beautifully form part of Shuhe’s landscape.

Ambling along Sifang Street is like walking back through time. Archaic wooden facades surround the square, mostly restaurants and shops.  Some still dress in traditional attire.

Built entirely with stones, Qinglong Bridge is one sight I particularly love.

It is also the first among the many old stone bridges found in Shuhe. It spans a small river that starts at the Jiuding Dragon Pool with very clear water.

Every day, we walk to Shuhe for lunch stay till dinner. It is still a struggle to order as many do not speak a word of English. 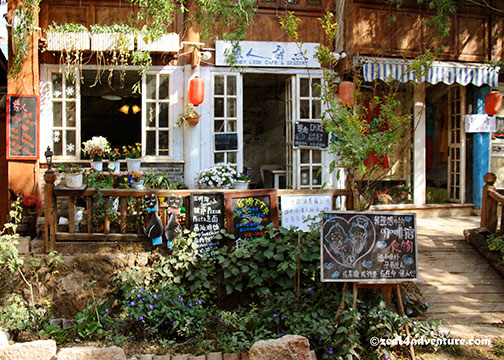 Everything is in Chinese, even the menu boards outside the cafes.

We, however, managed well, as you can see.

We even found a well-appointed hotel that we went back to for lunch the next day. 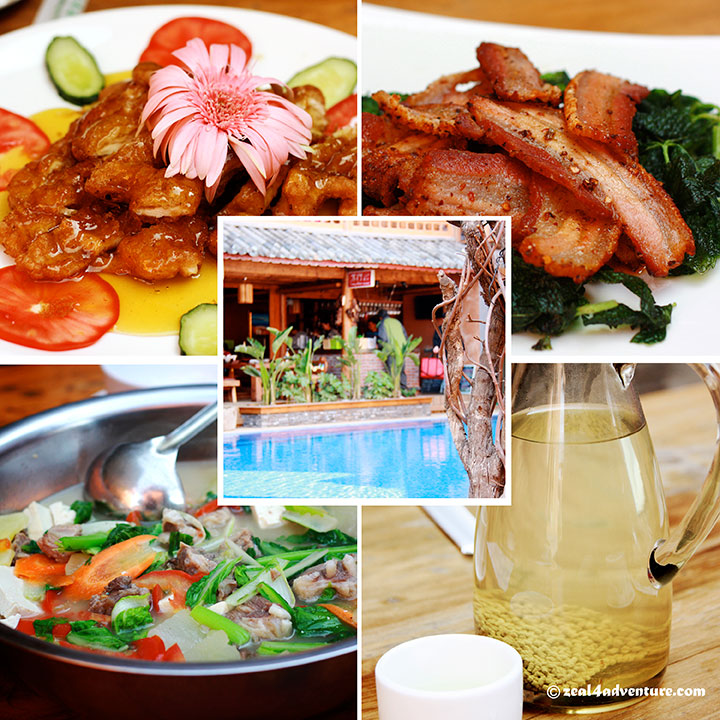 Hui Feng Inn served excellent food, Jack of Drawing Room Restaurant (found inside the hotel) is from Beijing but loved the place so much, he stayed. 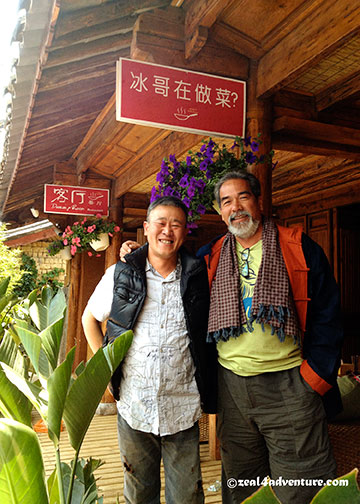 The courtyard of Lijiang Wa Jia 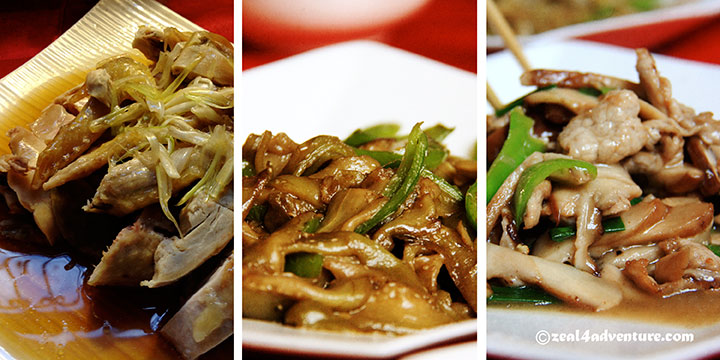 Here’s sharing more of the beautiful town with you. 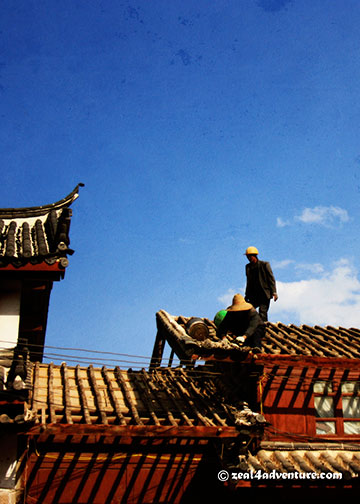 The Banyan Tree.  On a clear day, the Jade Dragon Mountain serves a its backdrop.

One of the most gorgeous Labradoodle I’ve seen.  The people of Lijiang love their dogs. 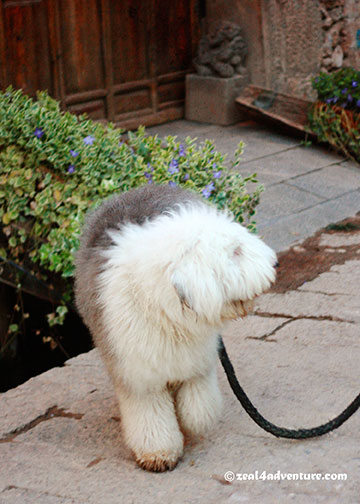 A pool that cuts through town, is surrounded by stores and restaurants. 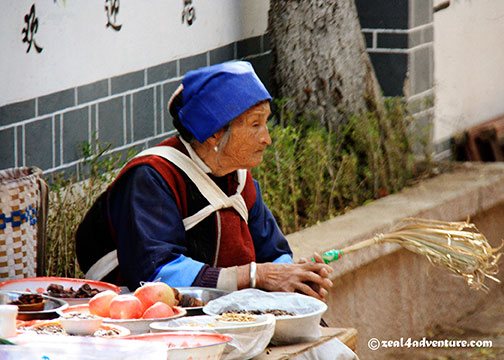 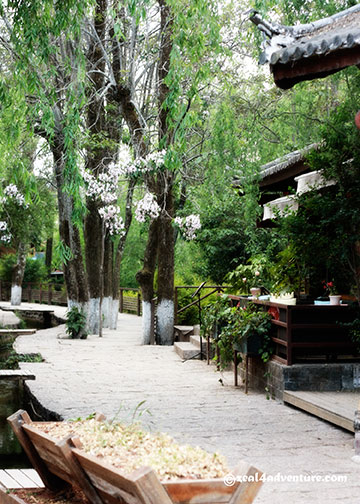 A boardwalk along the creek.

A map of Shuhe etched on wood found in Sifangd Square. 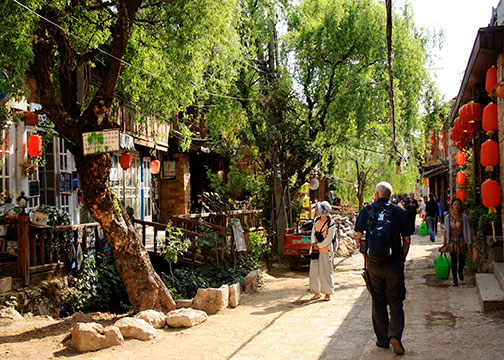 One of the many stone bridges near the square.